Bend in the Road

Here you'll find news, interviews, reviews, trivia, research, excerpts referring to gay speculative fiction ~
scifi/fantasy/horror/
paranormal
including historical and contemporary settings.
I hope that this Blog will be an interactive one.
I'm looking forward to sharing!

A Song of the Sidhe

Jeanne
I write romance novels - the steamy kind! I love fantasy and all kinds of "unreal" places. I married my HS sweetheart and we've been a duo ever since 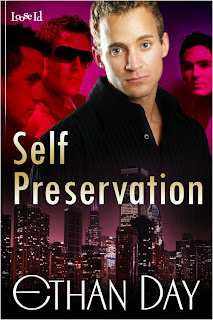 First, I must give credit where credit is due, to the list of interview questions for Ethan. All but one was swiped from MLR Press's Authors Blog. Ethan is such a fun guy and these questions are so much fun, I felt they were a perfect mix. So, thanks go to Alex Beecroft for posting them on our MLR Blog and I hope you'll enjoy sharing in Ethan's exuberance!
Ethan is a fellow Loose Id author and has had his first book, Self Preservation, published this year. His next book, Dreaming of You, comes out this May. It's also, as Ethan says, "a romance that’s bent with my style of humor."
So, here's.....Ethan!

Ethan is a delightful guy. And, if you can imagine it, he has still more to share! Surf on over to his Addiction to Fiction Blog and his website to learn about his contests, read excerpts, check out more info on his books and his wips.
And, please, leave a comment here on The Sweet Flag so Ethan will know for sure that "you like him. You really like him!" ;~D

Great interview questions, and great answers! Thanks to both of you for an interesting diversion from work. :)

Glad you stopped by, Astrid.
Credit for the questions go to Alex Beecroft.
Funny answers are all Ethan's!

Hey, Ethan, great fun, and I loved your excerpt on GWR- Actually, I'd love to check out that morning look. Well, I'm a long way away, in time and distance

Good luck with the writing,

ROFLMAO! Ethan...you know my mind...now all I can think of is you wandering your place laughing and........with your too long hair and glasses. LOLOL!!! Woot-imagination is a great thing.:)

Oh and where's my book? *wink*

Thanks Jeanne for allowing me into your world for a day or two. I appreciate the opportunity to speak to some of your readers! Thanks for stopping by Astrid! And Victor...I'd offer to put on a show for you, but if I did it for you I'd have to do it for everyone! I think that would take me down a whole other career path. ;)

Thank you Maurya, my sweets!

Thank you, Ethan!
It was so much fun learning this stuff about you!

I had a big crush on Parker Stevenson, too-- from when he played Gene in the movie version of "A Separate Peace."

The giggling and touching yourself thing? I find caffeine helps for the giggles. Not discussing the other.

I don't find myself saying this often, but I'm actually not familiar with that movie, Neil. I'll have to see if I can find it at Netflix!

Treva...now you have to know I would never touch myself inappropriately. :)

These are fun and revealing questions. I don't blame you for boosting them, Jeanne. ;-)

I think Hugh Jackman should stay naked. Daniel Craig is too short to carry off perpetual nudity. And his face scares me sometimes, which kind of ruins the impact of teh nekkid.

I certainly wouldn't have any objections to Hugh Jackman staying naked either.

Of course I kinda get a little thrill out of Daniel Craig's scary look. Gives me a little chill...I'd certainly jump when he called as opposed to making him come find me ;)

Regardless of height...no one with a body that ripped should ever wear clothes. LOL